A Consistent Psychological Pattern In The Stock Market

There’s an amazing psychological pattern that keeps occurring in the stock market:

1) An event (usually with a finite date) is overly hyped up by the financial media. Keep in mind the media is not there to inform us, they exist to startle and scare us so they can sell ads.

2) Because the majority of the financial world is already horrified about a crash and is investing with one foot out the door, many people rush to protect their accounts through put buying, shorting stocks, raising cash and/or buying toxic VIX products.

3) The event turns out to NOT be the end of the world but rather unnecessary, over-hyped drama.

4) The market doesn’t go down because the majority of people are hedged. For example, the option market makers are not going to allow the $1 put options that everyone bought to turn into $10. Even if the market does go down for a brief period, it recovers quickly due to the lack of sellers. In other words, because people hedge their portfolios, they are not looking to sell stocks.

5) The market ends up grinding higher, forcing many to cover short positions while most option hedges end up expiring worthless. Wash. Rinse. Repeat.

Some recent examples of this include the Fiscal Cliff vote at the end of 2012, the 2016 US Presidential Election and the 2017 US Presidential Inauguration. As I mentioned earlier, these were events that had specific, known dates; thus giving people giving people plenty of time to hedge and prepare for the worst.

Two examples of events with finite dates that resulted in selloffs include the August 2011 Debt Ceiling Crisis and the July 2016 Brexit Vote. In both cases, people didn’t prepare and hedge properly because the polls were showing the opposite of the eventual voting outcomes. The market bottomed when sentiment quickly shifted to extreme negative readings.

The key for me going forward is to try to identify this pattern in real-time and take advantage of it. The reason I bring this up now is because the current Health Care vote could be such an example. Personally, I think it’s over-hyped by the media more for political reasons than for the actual concern of Health Care. In fact, one reporter said if this vote doesn’t pass, we could see a 1,000 point drop in the Dow Jones. This is not only irresponsible to say, but it also creates unnecessary panic with investors who are already nervous and psychologically weak.

What’s amazing to me is the quick shift in sentiment readings that occurred last week. For example, the CNN Fear and Greed Index spiked down to its lowest reading since the Presidential Election, the total Put/Call ratio jumped to its highest close on Friday (3/24/17) since the election, NAAIM Exposure Index is at its lowest reading since before the election, and overall short interest saw an increase last week. Meanwhile, when you look at the technicals, last week saw a decline on light volume telling me that there wasn’t heavy selling overall by the institutions. 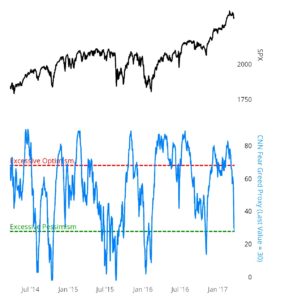 It wouldn’t surprise me if we see a recovery this upcoming week, as we are heading into quarter-end window dressing and money managers need to properly position themselves for the upcoming earnings season. I have trouble seeing more downside over the short-term as many are hedged into this over-hyped Health Care debate, and a further market drop bails out too many underperforming managers. Good luck trading!