Why This Is A New Bull Market

There is a popular definition in the financial media that a Bear Market is a -20% correction in the S&P 500. Don’t listen to it! It is wrong! This definition has hurt too many investors because they keep hearing this “7-year Bull Market is getting too long in the tooth” and it’s about to end. It has kept many people out of the market when we are potentially just starting a new Bull Market uptrend.

Two more points: Why are people using the March 2009 low as the start of the Bull Market and not using the new 6-year high made in 2013? If a -20% decline resets a Bull Market, then why are people ignoring the -21.6% decline in 2011? At the end of the day, who cares about the semantics! It REALLY is silly. I’d rather focus on making money for clients than spending time labeling the type of market we’re in.

Back in July, I wrote on my blog that the past 12-months (mid-2015 through mid-2016) was a Bear Market and we are JUST STARTING a new Bull Market with the highs made in early July 2016. Although the S&P 500 didn’t correct by the “popular definition” of -20%, the majority of stocks got decimated beneath the surface. Energy stocks corrected -50%, Biotech -40%, Financials -25%, and Small and Mid Cap stocks -25% over the past year. In addition, the most widely held stock Apple declined over -33% from its highs. Don’t laugh because this ruined the morale of many investors.

To me, the definition of a Bear Market has more to do with time than percentage decline. Why? Because time kills more people than price. In other words, prolonged periods of market prices bleeding and bleeding hurts more people than if prices drop quickly and snap right back. I honestly feel that we JUST STARTED a new Bull Market with the highs made in early July 2016, had a successful technical retest before the Presidential election, and confirmed the new uptrend with the recent strong volume surge to new highs (see chart). 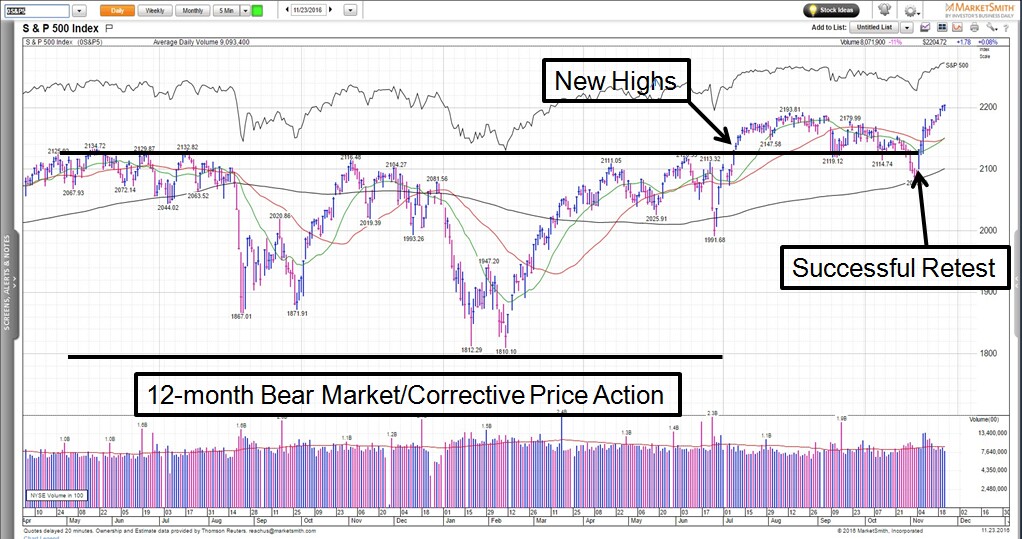 In addition, the small cap Russell 2000 index is just emerging from a 17-month Bear Market during which the index corrected over -27% (see chart).

The recent explosive breakouts in Financials, Steel stocks, Semiconductors, Regional Banks and Transportation stocks are simply too strong to ignore. Combine that with the constant “one foot out the door” sentiment and we have a recipe for what could be a sustained uptrend. Remember this: Don’t focus on what you THINK the market should be doing, focus on what it is ACTUALLY doing.

For information about our managed accounts, I can be reached at: jfahmy@zorcapital.com