Why The Pain Trade Is Higher

Six weeks before the election, I wrote an article for Yahoo Finance titled “The Market Is Forecasting a Donald Trump Victory.” In 24 hours after the post, I received over 500 hate emails. I have no problem with that part but I did have a problem with people reacting on emotion rather than using rational thought. As I stated in the post, it wasn’t a political statement. It was simply my interpretation of the price action I was seeing in the stock market.

1) Back in April, when the Dow Jones was at 17,500, I made a call on my blog that the Dow would hit 20,000 by year-end (which I still stick to). It was based on the market’s strong technicals, the globally coordinated effort to keep interest rates low, and the unbelievably miserable bearish sentiment. I also thought that Trump would win and his policies would stimulate growth, however, I hesitated to write about it because of the over-sensitivity about politics.

2) In late September, I couldn’t hold out any longer. The market technicals were so strong and I was starting to see many industrial stocks looking good. For example, you rarely see Railroad stocks acting well unless there’s an economic boom ahead. My thought was this economic expansion was more likely under a Trump administration, as regulations would be lifted and there would be less gridlock in Congress.

3) In the month leading up to the election, I read over 200 articles saying that if Trump wins, the stock market would crash. First, the market rarely does what everyone expects. Second, most of these articles were written by the mainstream media who hate Trump. In other words, they were very biased without being open-minded and giving him a chance. That attitude NEVER wins.

4) On the night of the election, with the Dow Jones futures down 700 points, I wrote on my blog that any dip would be a buying opportunity. One huge factor was career risk. In other words, there are so many underperforming money managers that were DYING for the market to come down and bail them out on the year. The market was not going to let them off the hook so easily and the pain trade was higher.

Going forward, the chart below is what we could possibly see under a Trump presidency. 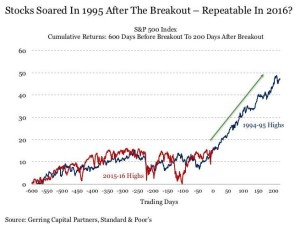 Will there be volatility? Of course! Will there be corrections and pullbacks along the way? Of course! However, over the long-term, if Trump is actually successful in implementing ideas that are favorable for business, we could see a bump in GDP from around 1.5% to closer to 3% growth. One last factor, sentiment is still extremely bearish because once again, people are having trouble separating their emotions about the election from rational thought. The pain trade is still higher.