Is The Stock Market Predicting A Trump Victory?

My job is to interpret what I see in the stock market and the market is forecasting a Donald Trump victory. That is one of the reasons why the market has been strong and will continue to be strong. Contrary to what you hear from almost everyone in the media, the market will NOT crash if Trump wins, and the market will NOT decline sharply if he does well in the upcoming debates and surges in the polls. Please stop being brainwashed by the mainstream media.

1) Trump will win Ohio, Florida and Pennsylvania and it’s game over! My reasoning is the INCREDIBLE number of people who are quietly supporting Trump but can’t voice their opinion. It is politically incorrect to publicly admit that you are supporting Trump. If you do so, you are instantly chastised and even viewed as a racist. The interesting thing is that many Trump supporters don’t agree with what he says; they simply think he will be better for business. For example, Carl Icahn recently said (and I’m paraphrasing): Do I agree with everything he says? Of course not. Do I think he says stupid things at times? Of course. But I don’t care about all that. I care about the economy and Trump will be better for business than Hillary. In other words, many of Trump’s supporters are focused on the more important issues instead of obsessing over every foolish off the cuff remark.

2) The stock market started a new bull market in July of 2016. The technicals are incredibly strong and the sentiment forecast is partly miserable with a chance of a crash. The thought of a 1994-95 repeat scenario for the markets (see chart) BLOWS people’s minds away. 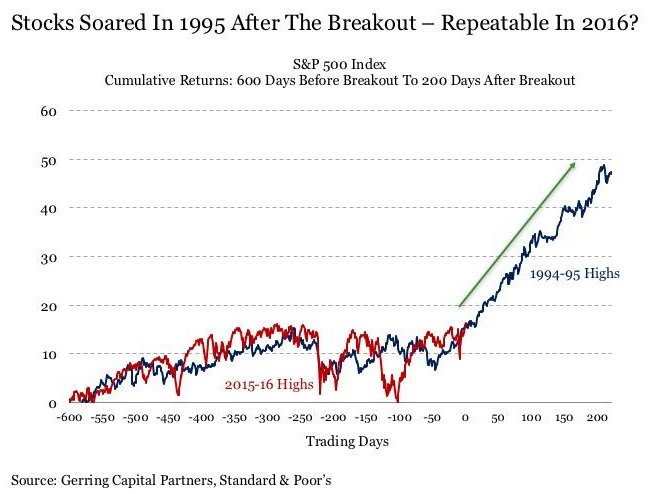 Why? Mainly because valuations do not support such a move. But think about this: What if Trump is actually successful in implementing ideas that are favorable for business and growth? GDP is currently running around +1.3% this year. Trump is projecting +4% growth, which I think is too aggressive. But let’s meet halfway. A 100-150 basis point increase will have a profound effect on the economy. We’re talking hundreds of billions of dollars that could easily help provide fuel for this new bull market scenario. Keep in mind, the market is a beast and has a mind of its own. It’s a discounting mechanism and trades on what will happen in the future. My theory is that it’s forecasting a Trump win, a more business friendly environment, and a stronger economy over the next few years.

3) If I’m wrong and Hillary wins, I still think it will be positive for the market. Many people believe she will continue Obama’s low interest rate policy, and we also can’t underestimate her ties to Wall Street. She is not only a former New York senator who understands Wall Street better than our current President, but she also has to support her major Wall Street donors. Think about this: The stock market has done incredibly well under arguably the most unfriendly business President we have seen in our lifetime. Can you imagine how well the market would do with a business FRIENDLY President?

Here’s the bottom line: If Trump wins (or surges in the polls), there will be stock market volatility. Most of this will be created by the mainstream media, mainly because they despise Trump. My feeling is this could be more like a Brexit event, meaning it will be a knee-jerk reaction that will quickly get gobbled up by the big institutions. My best advice is keep a clear head. Don’t let any potential political hatred keep you from taking advantage of what could be a strong market ahead. And please stop listening to the media and all their crash predictions if Trump wins. The stigma of admitting to being a Trump supporter makes me think that if he’s within a margin of error in November, he wins in a landslide. Are you prepared?