Last Friday (Sept. 9), the market saw its biggest drop since Brexit and the same psychological pattern happened again: A huge spike in fear.

I have said this over and over for the past few years. The market will have pullbacks and shakeouts, but it will not see a SUSTAINED correction if everyone is expecting it and prepared for it. It’s amazing how on EVERY sharp decline, we see a spike in put protection, a rush into vix products (which are toxic by the way), a spike in bearish sentiment and a reduction in equity exposure. Here are three examples:

1) AAII – This week’s Individual Investors survey showed a spike in Bearish sentiment from 28.5% to 35.9%. This jump is the highest increase in three months and the survey is now showing the highest pessimism since June. Regarding Bullish sentiment, you can see the decrease in the chart below (via @bespokeinvest), as the market is going up. 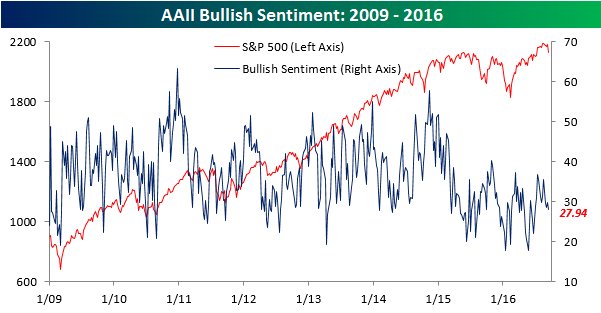 2) NAAIM – This survey of active managers has consistently been above 90 (meaning 90% invested) since early July. In my head, I was projecting a drop into the low 80’s, but it came in at 68.55! Again, a quick rush for the exists after one down day.

3) The last example is more informal as almost everyone I spoke to last weekend told me how the market was about to crash and there is no way they would invest money at these levels. Also, many traders were asking me about short ideas and told me my bullish thesis is all done.

Again, the amazing shift in sentiment after one down day.