In the past two years, the S&P 500 has essentially gone nowhere, frustrating the majority of investors. We have seen three “V bottoms” (shown in the chart below) where the market shoots down about -10% (resulting in losses), only to grind right back up as if nothing happened. Also, beneath the surface, many sectors corrected significantly during the past two years: Energy -50%, Biotech -40%, and Small Caps -25%. 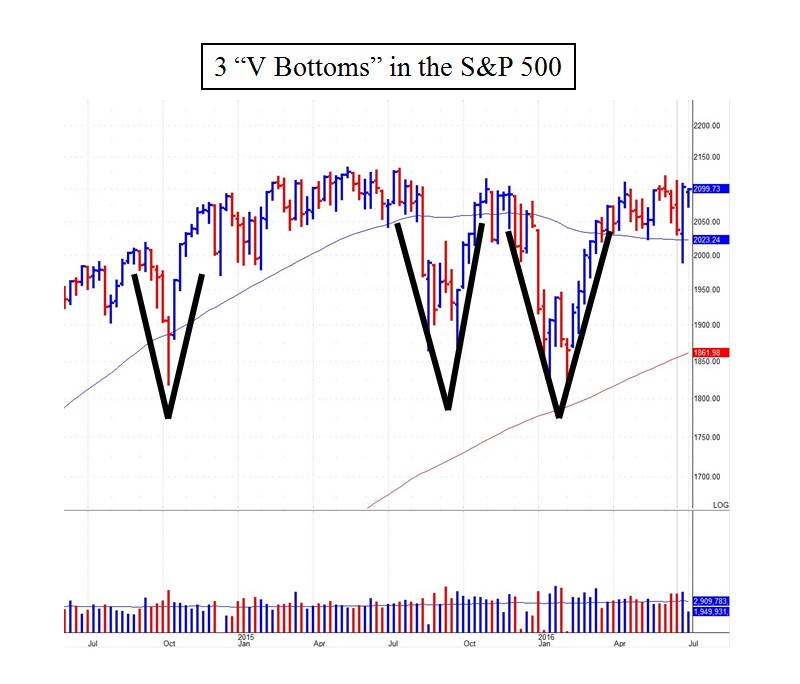 With regards to traders, many are frustrated because the market goes down but doesn’t STAY down. Why doesn’t the market stay down? There are many reasons but two main ones come to mind: 1) Liquidity – We are still in a globally coordinated effort by Central Banks to keep interest rates low and the markets high. 2) Psychology – During every recent selloff, there is a HUGE rush to buy protection because no one wants the decline of 2008 to happen to them again. As I mentioned before, corrections rarely occur when people are fully hedged and properly prepared for one. Here are my thoughts going into the second half of the year:

1) The recent decline sparked by the Brexit fears may have been the last shakeout before the market finally breaks out of its two-year range. What impresses me the most is the velocity of the rebound. The market recovered on enormous volume, showing that once again, big institutions continue to support the market on declines. Of course we won’t make new highs tomorrow, but it wouldn’t surprise me if it happens sooner than later.

2) If we breakout to new highs, we could see the chase trade start to happen. This is when under-invested and bearish fund managers are forced to put money to work so they don’t risk losing their jobs. It has happened many times throughout history where liquidity and low rates helped to fuel an upside rally. As I mentioned earlier this year, Dow 20,000 is a real possibility. Will it happen in a straight line? Of course not. We will still see corrections, pullbacks, and quick shakeouts along the way.

3) Many sharp fund managers (who I respect tremendously) have been vocal over the past few months with bearish market calls. I think they will eventually be right, but they are too early! Why? Because the Fed is on the market’s side. The Fed is NOT raising rates this year or anytime soon. As they say, “don’t fight the Fed,” so good luck fighting all the globally coordinated Feds.

4) Another reason for the market’s resilience could be the upcoming Presidential Election. The market could be anticipating a new President who will be more business friendly. I don’t think either candidate will be a “disaster” for the stock market. In fact, it could be just the opposite.

5) As a growth manager, I focus my attention on stocks showing the best earnings and sales increases. Right now, the strongest growth is coming from “cloud related” stocks. There are many to choose from, but I am mainly sticking to the Big Cap leaders for my clients: Amazon (AMZN) and Salesforce.com (CRM).

6) One small cap name we own is Acacia Communications (ACIA). I like how they priced their IPO at $23, opened at $29, and the stock has performed incredibly well in a tough environment for IPOs. The company is in a hot sector and they are showing explosive earnings and sales growth. Of course the stock is risky, but it could be a big winner over the next 6-9 months if the market cooperates.

In conclusion, I feel the market is going higher mainly due to the liquidity provided by Central Banks. This will also help M&A activity, as companies will find it easier to finance large deals. In addition, I don’t feel the economy is going into a recession. Certain sectors such as Energy and Financials are in an earnings recession, but they could help fuel the market higher if they turn around. Bottom line: It hasn’t paid to get too negative on this market because of its incredible resilience. I continue to lean to the bullish side until proven otherwise.

For those interested, I am opening my Managed Accounts (for IRA and taxable accounts) for the next 2 weeks. Please email me for more information: jfahmy@zorcapital.com